Today the spotlight of Rewind #IndieTBC 2018 is on Sunanda Chatterjee who is a well-known for her books among the readers of romance genres.

Her books have been listed among the Top 100 bestsellers on Amazon USA and Amazon India in Asian Literature, Indian Writing, and Asian Drama categories. Not only this, Sunanda Chatterjee’s short stories have also appeared in short-story.net and induswomanwriting.com.

While medicine is her profession, writing is her passion. She loves to write fiction when she is not at the microscope making diagnoses. Sunanda says, ‘My life-experiences have taught me that no matter how different people are, their desires, fears and challenges remain the same.’

Sunanda Chatterjee grew up in Bhilai, India. After a 5 year stint in the Indian Air Force, she completed her studies in Los Angeles where she is now a practicing pathologist.

She now lives in Arcadia, California, with her husband and two wonderful children. In her free time, she paints, read, sing, go on long walks, and binge-watches old TV dramas.

Before I introduce you to her latest novel, let me give you a glimpse of her earlier accomplishments.

Sunanda Chatterjee has 13 distinct published books under her name and all of them have been a huge success. Listing below few of her distinguished works which have left marks in the heart of many readers – 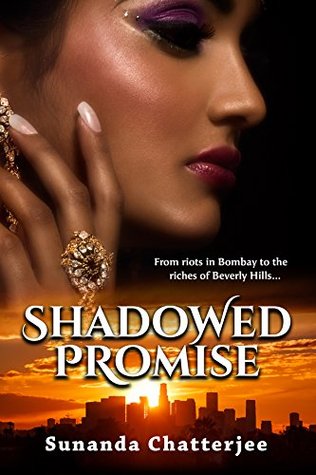 “I bring bad luck to those I love,” said Moyna.

Moyna’s promise to protect her cousin’s baby after riots in Bombay comes at a terrible cost. And now, to keep him safe, she must leave home and everything she’s known to find a life in America.

Heir to a law empire in Beverly Hills, Sameer wants only two things: to become a politician, and to love Moyna. But Moyna insulates herself to protect others from her ‘unlucky curse.’

At the cusp of political victory, Sameer faces increasing gun violence and death threats leading to a FBI investigation. But his greatest challenge comes when a shadow from Moyna’s past threatens to destroy their future.

What hope do they have with the media hungering for a scandal?

A saga of friendship, redemption, and forgiveness, Shadowed Promise is a journey from blind faith to triumphant love. 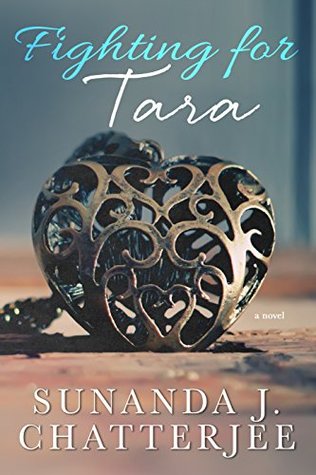 How far will a mother go to save her child?

“I have no use for a baby girl. Get rid of her tonight!” He towered over her as she cringed in fear.

But Hansa, a thirteen-year-old child-bride in rural India, refuses to stay a victim of the oppressive society where a female child is an unwanted burden. Instead of drowning her baby, Hansa escapes from her village with three-month-old Tara.

Hansa soon discovers that life as a teenage mother is fraught with danger. But a single lie opens the door to a promising opportunity far from home.

Just seven years later, Hansa finds herself fighting for Tara’s life once more, this time in an American court, with a woman she calls ‘Mother.’

Will the lie upon which Hansa built her life, defeat its own purpose? How can she succeed when no one believes the truth?

A story of two mothers, two daughters and a fight to save a child, Fighting for Tara explores the depth of love and motherhood.

THE BLUE HOUSE IN BISHOP 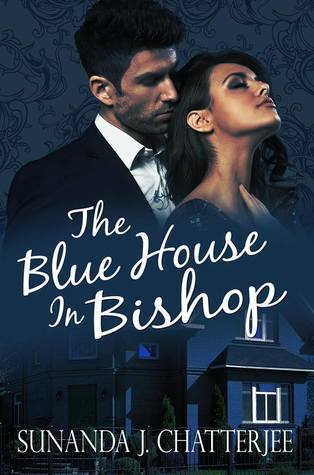 A broken soldier with a past, a doctor with a secret, an ex-cop with a mission, and a mysterious woman must fight a drug lord and the FBI to find justice.

After an accident, ex-Special Forces Capt. Duke Wilcox is forced to recover in the house of his old college roommate, Dr.Sunil Samant. Haunted by his failed mission and failed marriage, Duke has lost his trust in women and yearns for a chance to redeem himself.

Indian Police Inspector Alisha Raj has a passion for bringing criminals to justice. After leaving the police force with a broken heart, she agrees to an “arranged marriage” with Sunil. But it is an unusual proposal; Sunil asks Alisha to pretend to be his fiancée to please his dying mother.

Alisha comes to Bishop to leave her past behind, only to fall hopelessly in love with Duke. But she is engaged to Sunil, whose mother is expected to visit any day. The attraction seems mutual, but Duke’s troubled past prevents him from opening his heart.

Everything changes when a mysterious woman shows up with a baby, seeking Sunil’s help.

But is this woman who she claims to be? Why is the FBI after her? How did she get involved with a Colombian Drug lord?

A story of loyalty, camaraderie, and love, The Blue House in Bishop brings four strangers together in a fight for survival.

SINS OF THE FATHER (WELLINGTON ESTATES #1) 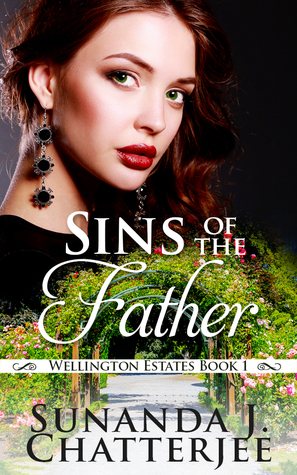 Police Officer Harrison McNamara grew up with a silver spoon in his mouth. The former Wellington Estates heir has dedicated his life to taking criminals off the streets. But when he goes undercover to expose a blackmailing scheme, he meets a freelance model who may hold a key to his past.

For psychologist Laura Carson, freelancing as a model is the perfect bridge until she can set up her practice. But her modeling agency isn’t what she expected. Encountering the enigmatic undercover cop might be everything she’s ever wanted—and everything she must avoid.

As Laura and Harrison grow closer, their past threatens to destroy them. Trapped in an unending cycle of guilt and blame, can they find a way to bury the sins of the past for a future of redemption and love?

Book 1 of the Wellington Estates Series, Sins of the Father is a stand-alone romantic saga. 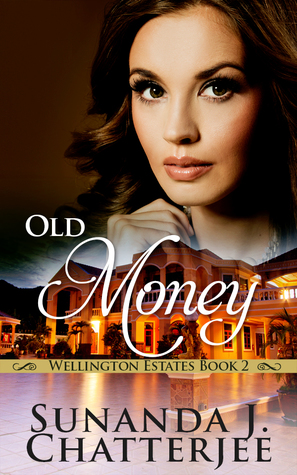 “Families are made from love, not DNA,” said her father.

Fashion designer Juhi Raina has always struggled with her identity; an Indian-American, she straddles two worlds, haunted by salacious rumors of her family. After a break-up with her fiancé, all she wants is a little distraction. But the handsome photographer threatens her uneasy status quo.

Wellington Estates heir-turned-photographer Connor Riley shuns his family’s wealth and abhors all form of pretense. He is mesmerized by Juhi’s simplicity, and Juhi is drawn to his candor. The two misfits make a perfect match. But being with Juhi brings challenges Connor may not be ready for.

The past unravels, revealing secrets that may be best left unopened. But can Juhi and Connor look past the deceit and shame to reclaim their love?

Book 2 of the Wellington Estates, “Old Money” is a stand-alone romantic saga about heartbreak, loss, and finding forgiveness despite all odds.

In addition, to the two books under the Wellington Estates Series, this March 2018 Sunanda Chatterjee brought out the third book in this series.

THE TROUBLE WITH LOVE (WELLINGTON ESTATES #3) 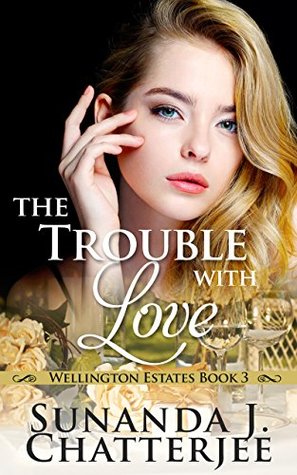 “You float through life-like a piece of driftwood. Aimless. You have nothing to strive for.”

Wellington Estates heiress Danielle Riley has everything her heart desires. But for the first time, she wants something she cannot have: Mike, the poor, proud, talented athlete, whose mother is working class, whose family is beneath hers.

Mike Melgoza works hard for a living and bears a terrible secret, a secret that clouds his decisions, that pollutes his relationships. He mistakes Danielle’s generosity for pity, spurning her love and everything she represents.

Brokenhearted, Danielle embarks on a journey to rural India to find purpose, and her life transforms in ways she hadn’t imagined possible. But neither distance nor time can make her forget Mike.

When fate throws them together again, can they resist their mutual attraction?

Book 3 of the Wellington Estates, “The Trouble with Love” is a stand-alone romantic saga about privilege, prejudice, and defying social norms.

This book was immediately a huge success. I think the review written by Devika Fernando says it all

This book made me cry tears of anguish and joy, and confirmed what I believe: Each of us has a purpose in life that we need to find in order to be truly happy.

We see a lot of books where the hero is filthy rich and the plain Jane heroine becomes attractive and interesting to him for some reason or other. This is a ‘billionaire’ romance of a totally different kind, though it’s also sort of tale about ‘from rags to riches’: Danielle, the heroine, is the wealthy one with all the privileges, and the hero Mike is the poorer protagonists with struggles and a dark past. Interestingly, it isn’t their financial or social status that is the biggest conflict between them, at least not upon second glance.

It’s the way they treat said status and the way others use it against them. Again and again, Danielle seeks to escape from her gilded cage, and again and again, reality puts her in her place. I rooted for her from the beginning, and I’m glad she got her chance to come into her own. Even if that meant harrowing experiences in India that leave scars not just in her but also in my soft reader’s heart. I shed tears alongside her and for her, and then I cheered loudly for the happy ending she gets with Mike.

As usual, the author delivers a fast-paced story filled with palpable emotions, intriguing details and clever connections only revealed at the end.

To sum up, I can definitely say that the readers are highly impressed with Sunanda’s ability of weaving elements of romance, drama and suspense. It is done in such a sublime way that the story stays with them long after.

So which one of the books caught your fancy?

Grab them right away from the links given below

(These are Affliate Links. It means that I would receive a small commission at no extra cost to you, if you click on any of the links and make a purchase. If you do, I thank you for the purchase)