It was such a pleasant surprise for me when I read about ‘Guardian Angel’ being published around Christmas time. As a reader, I was really elated because this book revolved around a character that was missed by many, I included. Yes, this story is about ‘Nikhil Mahajan’ who went missing in the first book of this series ‘The BodyGuard’.

You can read my review of The Bodyguard here. 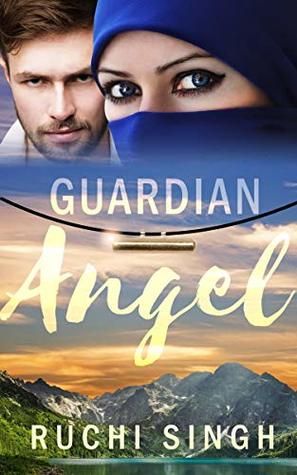 A thrilling tale of unconditional love amidst danger and certain death!

Security expert Nikhil Mahajan is in mortal danger. Gravely injured and unable to see, he is in the midst of hostile strangers in an unknown place. Any hope of survival is fast fading away.

Something about her patient tugged at Ayesha’s heart. It was madness to get involved, and yet… there was something about the quiet courage with which he faced his situation that would not let her look away. After all, it was a rare man who could keep not just his composure, but also his wit in the face of certain death.

She had to do something even if helping him might mean sharing his fate.

The book starts with unravelling the mystery behind the disappearance of Nikhil Mahajan.  When he regains his consciousness, Nikhil finds himself in a strange place among strangers. He is broken and bruised, unable to see. There is an angel looking after him but will that angel be able to protect him from the mortal danger he is facing.

I loved the book cover. Those eyes with a veil are simply mesmerizing. And after you read the book you feel the cover being so apt with small tiny details like the necklace and all. All in all, I simply loved the cover.

Ruchi Singh had impressed me with her writing skills in her earlier book. I am a fan of her characters. She draws some of the very sensible and realistic characters I have read till date. I can easily understand her characters and their reason to do the actions in the story. It is a different experience for me because generally, I love to read any book if I like the storyline but when it comes to Ruchi… first thing I connect is with the characters she develops in that story.

‘Guardian Angel’ was no exception to me. The main protagonists were neatly carved out. I was very much impressed with the changes the author brought in Nikhil’s personality in this book. The situation which he comes out of, it was natural for him to change and I loved that the author took this aspect into consideration. He was a changed man and it was completely understandable.

The actions of the female protagonist were led due to her passion and emotion and not logic. I could still relate to it because she was quite young to take a step back and think before she acts. So even if her actions were bizarre and too risky, I didn’t find any oddity in them.

The storyline of ‘Guardian Angel’ is thrilling. There is lots of adrenaline rush and thrill going around in the story. It kept me on the edge. The ambience in the story is mostly dark and foggy. It kept the mood of a thriller novel at its peak. The twists in the plot are interesting and full of suspense.

One such twist to mention is the dream sequence. There are no heads up for the dream. The positioning of the dream in the story is so on the point that one will never realize it as being a dream until it is coming towards the end. My brain started questioning me –‘What is happening here? Why is it so bizarre?’ by the time I could reach the end. It was amusing but clever take by the author.

I have mentioned this in my review of her earlier book. Ruchi Singh likes to keep a tight leash on her story-line. Her stories don’t branch out much and I like this skill of hers. Guardian Angel was no exception. From the beginning, the plot was all around the protagonists and it stayed like this till the end.

The pace is good and the content doesn’t feel dry at all. The action scenes described are quite vivid. The smart dialogue exchanges between various characters, at regular intervals in the story, are quite amusing.

The one banter about Ramprasad was really funny.

I also loved the way the author has shown gradual changes in Nikhil’s way of thinking. He became more realistic after all that he experienced. The way he breaks down in the second half of the story and accepts his limitations really touches me. He comes to realize that his way of thinking was so consumed by his arrogance that he couldn’t see beyond that. These emotional changes which he goes through were marvellously portrayed.

This is not a drawback actually but an unfulfilled wish of a reader. As a romantic thriller, I felt that the book had less romance. I wished it to be a little longer than what it was.

Do Read, The Nameless Relationship by Preeti Shenoy

Ruchi Singh has outshone her skills as an author with this one. A fast-paced book which you just cannot leave until you read its last page. The characters entice you, the plot engulfs you and the suspense kills you. Grab your copies now.

Author of the bestselling romantic thriller ‘The Bodyguard’, Ruchi Singh is an IT professional turned novelist. Her other published novels are ‘Take 2’ and ‘Jugnu (Firefly)’. Winner of TOI Write India Season 1, Ruchi has also published a short story collection, ‘Hearts and Hots’, besides being a contributing author to many anthologies.

A voracious reader, she loves everything—from classics to memoirs to editorials to chick-lit, but her favourite genre is ‘romantic thriller’. She has also reviewed many contemporary works of authors. The reviews are published on her website www.ruchisingh.com

Besides writing and reading, her other interests include dabbling in Indian classical dance forms.