‘The Blood of Whisperers’ by Devin Madson

I chose to read ‘The Blood of Whisperers’ mainly because of the title. The title was unique and gave me the hope of a great fantasy. Keeping my hopes intact, I read the book and this is what I have to say now: 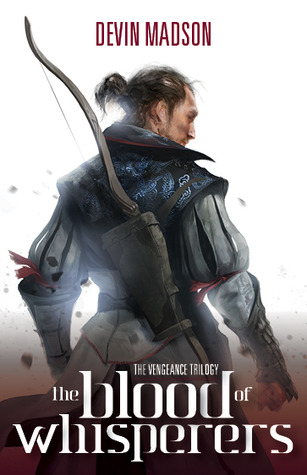 Title: The Blood of Whisperers

Source: Received by the Author through Booktasters

They call him the Usurper.

A man of common blood sits on the throne. At his command, the last emperor was executed, but vengeance is coming…

Endymion is an Empath. He was born with the ability to feel another’s emotions and reach inside their hearts for their deepest secrets. Often despised, he lives a nomadic existence, but when he finds himself imprisoned for sorcery and facing death, his past will condemn him. Born Prince Takehiko Otako, the only surviving son of the True Emperor, Endymion is caught in the brewing storm. But as his skill grows beyond his control, has the truth come too late?

The fight for the Crimson Throne has begun.

As I was lured by the title of the book, I started reading it as soon as I received it. I had an inkling that there will be some elemental magic related to blood in the story. My hunch was partly correct as I further read the story but to be honest, my excitement had fizzled out by the time I reached that part in the story.

The ‘The Blood of Whisperers’ is a story about a civil war against the Emperor for claiming the Crimson Throne. With a backdrop of the Japanese Empire, the story leads us to meet three main characters who get involved in this political warfare without knowing the real game.

The story is good but there were a few points which need mentioning here. So, do read further –

I found the desired pace of the story from the third chapter onwards. It is well-known that the first chapters act as a base of the story but they are also the chapters which should grip the reader to the story. The first few chapters of ‘The Blood of Whisperers’ were too slow for my liking. It felt as if I was trudging myself out of a sand desert. It was dry and didn’t have the grip to hold my attention.

In addition, there were many details which were not necessary to be put at such length. For instance – The description of the journey taken by the two characters, in the beginning, to reach a place was longer than necessary.

After reading the complete book, I can’t deny this fact that the story has good content. However, as a reader, I feel that the presentation of the content also matters. If you present it in a dull way the audience may not receive it well. If you present the content a little late than required, the readers may lose the patience to read it. In both cases, it is the book which suffers.

The book was slow in the beginning and for more than the required time. As a reader, my connection with the book weakened by the time I reached the point where the story starts coming together. The way the events turned up after the story got its pace, gave me a pleasant surprise. But what remained with me after I read the book is what counts the most. I remembered the slow pace the most. ‘The Blood of Whisperers’ had great content but the way to present it was a little lacking. The story-line was strong but still… I couldn’t connect with it as much as I wanted to.

A story is like weaving a fabric. If you leave the threads in between or start using the thread suddenly, the final pattern gets affected. I could feel the same with this story as it progressed. Either few story threads were just dropped in between or were never picked up from a proper place.

For instance – After a particular incident, one of the side characters found in the first chapters has no mention in the whole story at all. Whether this character survived or not, the reader never comes to know. The character was among the first ones to be introduced in the story and then suddenly it looked as if the author forgot about him. That is why it kept on nagging me.

The characters in this book were a mixed lot. I mean to say that some were mature, stable and sensible whereas others were just the opposite. There were few who fell in between. My favourite character was Darius. His thoughts, his actions and his identity were brilliantly drawn.

My least favourite character was Hana – Immature, impatient. Somehow, I do not understand the fact of carving out such characters under the given circumstances. (When one suffers in life, it is a lesson one needs to learn from. If you cannot learn from the problems you faced in life, then nobody is a bigger fool than yourself.) The fact is given, that she has had a difficult life but now commands a battalion; and the ways showing her jumping in any situation without thinking twice – was something which I couldn’t fathom. It was a contradiction.

In my opinion, Endymion didn’t come out very impressive in this story. The character was neither weak nor strong. Maybe he becomes more defined in the sequels but in this book, his character was in a progressive state. The only thing which really stood out for Endymion and the trait which I immensely liked, was his ability to decide for his own actions. As a reader, I could perceive that his abilities related to being an empath were the strongest but nevertheless, his voice of reason was the one which ruled him. This character was developed enough that he could review and reanalyse his decisions.

Then there were other characters. The author has drawn them well; good enough to leave their mark. The Emperor and the villian both were interesting. I would side by the emperor more as in spite of being a normal human being, he still had the upper hand and sharp mind. I am pretty sure that his role increases with the progress of the story in the books that follow.

There is magic, an imperial family line, army of rebels and a  war. The protagonist with unbound potential and a powerful villain. There is darkness in the story but still, few incidents keep the hope alive. The backdrop is absolute, the political struggle is intelligent and the villain is shrewd. Even the Emperor had my interest. I even liked the climax at the end. The ending of the story proves that the author has good content and readers will see it in the following sequels.

In the end, I can surely say that ‘The Blood of Whisperers’ is definitely a one-time read.

Grab your copies from