‘The BodyGuard’ by Ruchi Singh

A chance to read a Romantic Thriller ‘The Bodyguard’ by Ruchi Singh was something I couldn’t miss and that’s how I ended up saying yes when I was asked to do its review.

Someone wants Vikramaditya Seth Jr. dead.
He refuses the Z+ security option offered by the government. With too many variables trust is hard to come by…

Esha Sinha prepares for her first assignment outside of active army service, oblivious to the fact that she has to babysit a man who has no respect for rules or protocol—a man who is headstrong, workaholic and a tenacious flirt. As the attraction between Vikram and Esha simmers and sizzles, another attempt is made on his life.

The killer is resourceful and determined.
The motive is unclear and perplexing.

Will they be able to nab the assassin before he gets to Vikram?

I went into the book with an open mind as after reading the blurb I had a strong inkling of how the story will progress. Although the storyline was quite predictable the treatment of the story was not. Read in my review further…

I liked how the story started. It was gripping and full of thrill. The actions the characters get involved in immediately after the story starts, made the reader within me curious. The anticipation all around in the first page motivated me to flip pages further. Ruchi has kept this feeling of suspense intact until the end, which keeps the story running on the edge.

There was a steady momentum throughout. The twists and turns in the story were appropriate and adjusted brilliantly within the flow of the story. There was never a feeling of over-the-top actions. Ruchi kept a tight rein on the pace of the story which didn’t allow the feeling of disconnect seep into me as a reader.

I was really impressed by the writing skills of Ruchi as she didn’t lose the focal point of the story at all. There were no loose ends. She didn’t pile up the story with innumerable characters. There were no background stories of each and every side character we came across in the book. It was welcoming for me as I could focus on the story rather getting entangled with every character in there. Moreover, the narration of the story from various point of views gave a wholesome idea of the plot.

This was the highlight of the whole story, as far as I am concerned. The characters development, for me, is ‘Bang-On’. Ruchi Singh has done an impeccable job while sketching the characters. They felt very realistic to me.

The character of business tycoon Vikram is of a practical man who takes things as they come. His calm demeanour in spite of the danger lurking around him; he playing different roles in his life and enjoying life as it is- is quite believable. People do have such lives where there are a lot of things happening around them but in spite of that they keep living on; behave normally; celebrate life. Don’t they?

Esha is a smart and sensible lady who is in total control of her head and heart. I love her character the most not because she was an ex-major and is tough as a nut but because she has the capability to rein in her emotions. When the sparks fly between Vikram and Esha, she keeps her head on her shoulders rather than giving in without assessing the situation. She thinks over and over before coming to a conclusion of where Vikram and her relationship stands. Till then, though her heart flutters with the attraction, she keeps control over her not to show any emotions. I liked that kind of strength in Esha.

I was a bit disappointed with the climax of ‘The Bodyguard’. It was very abrupt. The unbalance was unexpected and as a reader, I couldn’t come to terms with it. 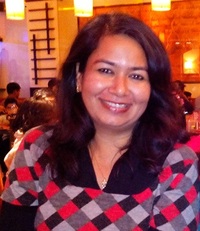 Author of the bestselling romantic thriller ‘The Bodyguard’, Ruchi Singh is an IT professional turned novelist. Her other published novels are ‘Take 2’ and ‘Jugnu (Firefly)’. Winner of TOI Write India Season 1, Ruchi has also published a short story collection, ‘Hearts and Hots’, besides being a contributing author to many anthologies.

A voracious reader, she loves everything—from classics to memoirs to editorials to chick-lit, but her favourite genre is ‘romantic thriller’. She has also reviewed many contemporary works of authors. The reviews are published on her website www.ruchisingh.com

Besides writing and reading, her other interests include dabbling in Indian classical dance forms.

‘The Bodyguard’ by Ruchi Singh is here to tantalise your thriller instincts with a fast-paced, intriguing storyline with well-developed characters and lots of suspense.

This is really intresting and I am so much eager to read this ..Ruchi -Ruchi Connects

Do let me know your thoughts after you read the book 🙂

Great review and very detailed. I love the character of Esha from your review.

Esha is my favourite too. Glad you liked the review 🙂

[…] I was lucky enough to get a chance to review this book written by Ruchi Singh. You can read my review here. […]