The second instalment of Amethysta Trilogy by Sara Secora has finally arrived. The first book in this fantasy series was launched in August 2016. I remember that I had liked the book back then. It was such a pleasant surprise when I received the ARC of Untoward Awakening. Although it has been 3 years the moment I heard about it, the story of Amethysta in ‘Throne of Lies’ came flooding back in. Sara surely took her time to write the story further but after reading this book, I am satisfied that the wait was worth it. 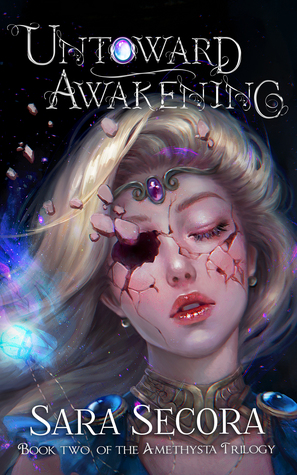 Untoward Awakening is the riveting sequel to Throne of Lies and a stepping-stone to adventure and self-discovery.
Amethysta Serelle is alone. Her loved ones are gone, and her dire secret—her unexplained magical power—now rests solely on her wary shoulders.
As she struggles to understand and harness her power, Amethysta must remain mindful of her royal obligations as heir to the Northwind throne. The balancing act proves tenuous, and with one crucial mistake, the worst outcome becomes her reality and compels her to leave everything behind.
To her fortune, a familiar face returns as her guide, and together they set out to far-off lands, traversing treacherous mountains and perilous seas, knowing that this is their final chance to alter Amethysta’s fate—and perhaps that of the entire realm. The great unknown stretches out ahead, and the ghosts of the past are never far behind…

The book begins from the point where the first book had ended. Amethysta’s world has been toppled upside down. She lost two of her most loved people yet she cannot grieve for them. Instead, she has to be the dutiful princess that her kingdom wants to see. She chooses her mate though her heart lies somewhere else. As if this is not enough she has to be cautious every time lest anyone knows her secret of having magic. Circumstances force her to leave her homeland to embark upon a journey which can bring her closer to the truth she seeks.

This book is about the growth of Amethysta as a person. There were many things I liked about the whole story and few which have a scope of improvement. Let me discuss them one by one:-

Secora’s descriptions are one of the strongest traits in her stories. She brilliantly sketches the landscapes and backgrounds through her words.  The various parts of the journey in a new terrain or around a landmark were mesmerizing. The striking details with which Secora wrote about the caves, lakes or the mountain pass brought them to life as I read the story.

Amethysta Trilogy by Sara Secora brings some very unique creatures. Not only most of them were so different to look at but they had distinct personalities as well. Also, I was very satisfied with the behavioural pattern shown by each of them.

As an eighteen-year-old, Amethysta is young, inexperienced, impatient but also kind, brave and passionate. She is cautious but tends to make mistakes. Many at times she tries to take things in her hand but fails to execute properly. Still, as a young person, she learns quickly and tries adapting to the changes coming in her life. As I read her, I had mixed emotions involving admiration and frustration. But this is what I loved about the author. She brought forth genuine traits of any teenager who is at the brink of going to adulthood.

Bex was another character I loved immensely. He was rude and rash but I could connect with him. His deeds were the outcome of the environment he was brought up in. The way he comes out of his shell is such a treat to read.

The incidents, the surprises, the twists and turns were quite captivating. Their journey was eventful – be it the new creatures they met or the diverse landforms they came across. Especially in the second half of the book, there were many surprises stored for the reader. To be honest I was not able to foresee any except one. No wonder, I couldn’t put the book down in between.

Initially, as I started reading the book and was into it for around a bit, I felt the pace of the story slowing down. I felt that the story was not going anywhere and was becoming monotonous. That particular phase of the book focussed more on the characters rather than the story itself. Though things changed after some time and the Secora held a tight leash on it till the end.

However, after completing the book, I realized that the part which looked dull to me was actually the one which held my emotions the most. Because it was that stage where I could connect to the characters and thus felt the loss when the moment arrived. Was this a deliberate move by the author to rattle the emotions of the reader? If yes, then I applaud her brilliance.

Untoward Awakening is a marvellous gem in Amethysta Trilogy by Sara Secora. It is quite amusing how the book leaves me satisfied yet wanting for more. Loved this book and eagerly waiting for the third one.

A fresh flower has bloomed in the Fantasy World. I wish to see it in its full glory soon. 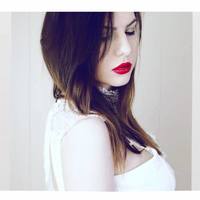 Sara Secora wears many creative hats, all of which are brimming with imagination and passion within her repertoire of talents and ventures. Whether Secora wields a pencil or microphone, she expresses herself through the power of words each day and into the night. You can find her in the heart of Detroit, Michigan, working as a full-time voice actress, while continuing to write whimsical stories full of enchantment, mystique, and insight—destined to intrigue readers of any age.

Sounds like a very interesting read! And i love they book cover!

Though I haven’t read her works. I seem to like how Sara has written the book. I live fantasies, magical power and a challenge is perfect food for me. Will read it someday for sure. Can u share how I can be regular in reading. I usually miss a day nd then day becomes two and ling. I lack consistency.. any tips
#damurureads #myfriendalexa

I have not read Sara Secora, thanks for introducing to me, shall look for this series after reading your review.

Sounds interesting Enjoyed reading you well balanced review. It is great to connect with a fellow book lover..

This is new book, never heard of it, thankz for introducing #millennialscribbler #myfriendalexa

That definitely sounds like a good book. I have not heard of this series before but then I do not read fantasy much. But I will try this one our but from the first book in the series.

Wow! This sounds like a lovely book! I like this genre so I’ll definitely look out to pick it up soon.

Looks to be an interesting trilogy series book would love to have it and read it. I like such fiction stories.

And another book is added to the TBR list! This campaign is making me spend too much! #myepicareads #MyFriendAlexa